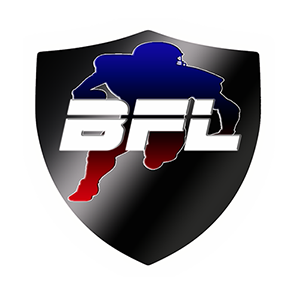 The Backbreaker Football League is a 40 team fully custom league of created teams and players. The league was created for showcasing the amazing Euphoria physics engine.  Although there is no cpu vs cpu capability in the game, Backbreaker is still great for entertainment and for capturing beautiful physics in instant replay.

The Backbreaker Football League has all levels of football including high school.  The original BFL had 32 teams, but was mixed with high school, college, NFL, and fictional teams all in one league.  The league was a bit chaotic, but was a whole lot of fun.  Since then, the Backbreaker Football League has respectfully placed each team in it’s proper organization, so they can compete against fair competition.

All new players joining the league will begin their careers as a bronze caliber player (the lowest rated) and upon completing the objective of their specific archetype, they will level up to either silver or gold.  Each tier (bronze, silver, gold) is directly tied to the salary cap, which keeps the amount of superstar players to a minimum.

Players that are released from the Backbreaker Football League will still have opportunities to play football in one of the sister leagues such as Backbreaker D-League, Backbreaker International, MFL, or NPSFL.