Opening week of the Backbreaker BFL throwback season from 2011.  This league was mixed up with a combination of NFL, NCAA, high school, and custom teams, which created a wide variety of gameplay experiences.  The original Backbreaker Football League had the most insane highlights and big hits, which is still unmatched by any other league.

Opening game of the Backbreaker season and the Skins decided not to show up to the game.  Well actually it wasn’t that bad.  The Eagles jumped all over they ass starting with a 2-0 lead after Tim Hightower was stuffed in the endzone for a safety.  They followed up the safety with a 7 yard touchdown run by Lesean McCoy to increase the lead 10-0.

With no response from the Redskins, Michael Vick connected with Desean Jackson on a 55 yard pass play that set them up first and goal.  McCoy went on to score his second touchdown of the game with a 1 yard td run to put the Eagles up 17-0.

The Redskins finally answered with a 77 yard big play to Brandon Banks (00:26), but the momentum was short lived.  Vick found Jackson again, but this time it was 67 yards to the house good night folks!

The battle of 2 all-time rosters.  If you like Backbreaker highlights, then you’ll love this game.  Let’s start with the interception by Peter Bouldware off of the pop up.  Troy Smith led his receiver Terry Glenn into danger and he got blasted by the safety which caused the turnover.  The safeties in Backbreaker are always looking for the big hit and Smith led his receiver into one.

Ted Ginn Jr returned a kick 64 yards to set up the Buckeyes in good field position, but all they were able to do is tie the score with a field goal.  FSU scored the first touchdown in the game when Warrick Dunn scored on a 80 yard touchdown run to take the 10-3 lead.

The Buckeyes responded with a touchdown of their own.  Troy Smith found Terry Glenn downfield for a 52 yard touchdown reception.  Smith was able to hit Glenn in stride, which is difficult to do in Backbreaker after the Greathouse patch.

Not just any 49ers team, but rather the 94 Superbowl 49ers.  Deion Sanders and Devin Hester on the same field is a highlight waiting to happen.  Both players had some big plays in this game.

The unlikely matchup between the fictional pro team and the fictional college team was a fun game to watch.  Darnell Jefferson lived up to his movie character status, which is basically a playmaker that fumbles lol.  To be fair, Jefferson scored on 2 huge touchdowns late in the game to tie the score.  The game ended in a tie.  Imagine that.

Ok stop!  Before you start thinking Bobby Boucher dominated this game, I’ll let you know it went nothing like that.  The Mud Dogs got their asses kicked all over the field.  Shayne Kilpatrick returned 3 punts in the same game.  Who the hell is this guy?

Backbreaker is known for its hard hits.  The defensive battle between these 2 high school teams represented the game well.

Game of the week!!!  The highlights start at 7:03 and they don’t stop.  Going into the 3rd quarter, the Saints were down 30-17 and then it happened.  The comeback of all comebacks.  The punt return by Darren Sproles was such an epic moment, because you can feel the momentum shifting completely to the Saints.  New Orleans did everything to lose this game, but found a way to win in the end.

Michigan ran through Notre Dame after they figured out how to cover #11.  Charles Woodson had a big punt return in this game that should have went to the house, but he got to fancy.

Reggie Reggie Reggie Bush is his name.  Luckily Bush is a return man, because he couldn’t do nothing against Nebraska’s defense.  20 carries for 20 yards is laughable.

A star was born and his name is Butta.  Butta had a pick six, a kick return, and was a offensive problem.  342 all-purpose yards is not bad for an opening game.

Run Cam run!  Newton’s 83 yard touchdown run was my longest ever by a quarterback in Backbreaker. That was Cam’s only touchdown, but as a team the Panthers dominated the ground game.

It appears that team USA have a potential franchise quarterback.  Cannon Joe threw for 370 yards, 4 touchdowns and a Win versus the Sabers.

Make a note to the Miami Sharks and let them know that Luther Shark can’t do everything by himself.  The Scorpions made Miami look like a high school team out there.

These 2 powerhouses came to play.  Danny Wuerffel and Tim Tebow did just enough to pull out the win against the all-time Canes.

Boobie Miles was on full display on offense and special teams.  His 4 total touchdowns was more than enough to beat EA Sports by himself. 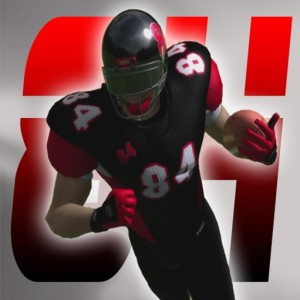